An Ape in the Toilet 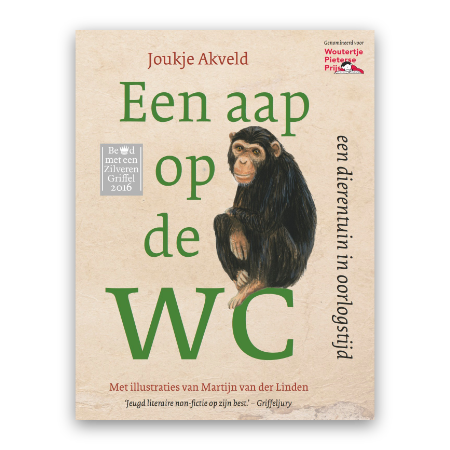 An Ape in the Toilet

Thanks to Anne Frank and her diary, the story of the occupation of the Netherlands in World War II is known all over the world. Anyone who wants to find out more about the subject can read books by hundreds of authors. However, many of those accounts are missing something essential: how it really feels to find yourself, from one day to the next, living in a world of danger and uncertainty.
An Ape in the Toilet by author and journalist Joukje Akveld, however, succeeds in capturing this aspect – and in a remarkable way. It’s all because of the book’s unusual perspective: we see the bombardment of Rotterdam through the eyes of not humans, but animals. Akveld has delved into archives and carried out interviews to chronicle the amazing wartime history of Blijdorp Zoo and its inhabitants.
These animals were very unlucky, as their enclosures were right next door to Rotterdam’s main railway station. The German bombers were aiming to knock out the railway lines, but ended up killing camels and tigers too. A sad and poignant detail here is that the zoo was already moving to a new location outside the city centre, because of a lack of space. The new zoo was nowhere near ready though, so the apes briefly had to be housed in the toilets of a nearby bar after the bombing.
Akveld does not begin with the war, but lovingly portrays the lives of the animals from beginning to end. We hear so much about the back story of Kali the rhino, Hans and Grietje the bears, and the group of chimpanzees that they almost feel like family and we start to worry about them. When the bombs finally fall, halfway through the book, it hits the reader hard. Fortunately, Blijdorp also had some famous survivors. The last of them, the slender-snouted crocodile Hakuna, died just three weeks before this book went to the printer’s. It’s almost as if it was meant to be.

'Literary non-fiction for younger readers at its best.'

'This original and captivating story about humans and animals leaves such an indelible impression not because the facts can all be checked, but because they have passed through the sieve of the imagination and are captured in precise language and striking images.'

'A wonderful history book for children (and adults).'